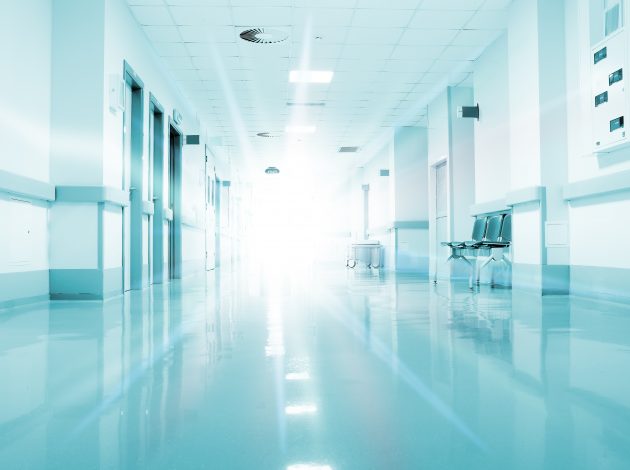 Since 2001, the number of cancer diagnoses in England has increased from 234,362 to 305,683 in 2017. Currently one in two of us born after 1960 will be diagnosed with cancer at some point in our lives. However, there is some good news. Sarah Caul takes a look at the bigger picture behind cancer statistics.

Better cancer survival is backed up by our recent release on survival estimates. 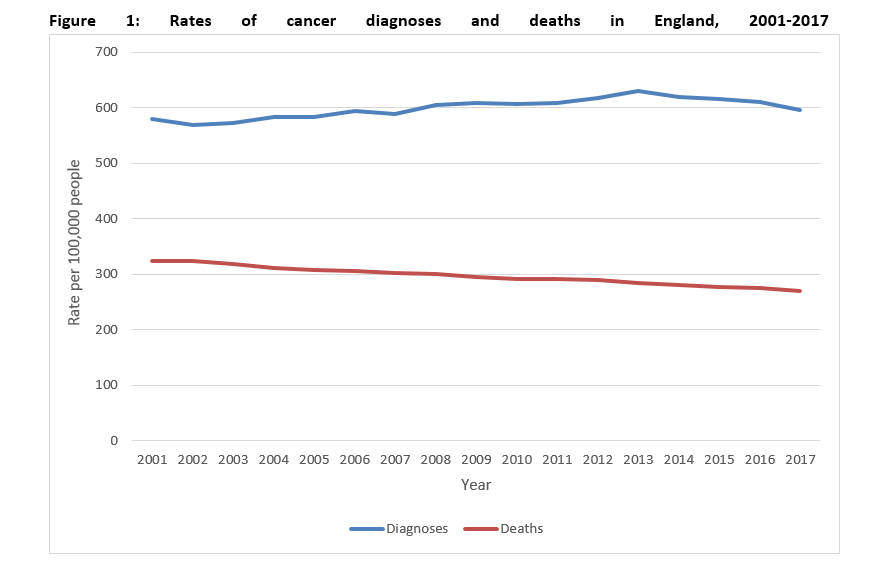 Why are we still seeing an increase in cancer registrations?

Our ageing population is one of the biggest factors affecting the increase in cancer diagnoses. In 2017 one in every five people in the UK (18.2%) were aged 65 years and over, this is expected to reach around one in every four people (24.0%) by 2037. We know from looking at our cancer registrations release that more than 65% of all people diagnosed with cancer in England are over the age of 65.

The introduction of screening programmes has also led to an increase in levels of cancer diagnoses. The National Breast Cancer Screening Programme targets women aged 50 to 70 years but has recently been trialing an extension programme to reach women outside this age range. Screening for cervical cancer is also offered to women aged 24 to 64. Bowel cancer screening is offered to those aged 60 and over, with a one-off bowel scoping screening available for those aged 55.

Lifestyle is also likely to be a contributing factor. Whilst we are seeing a decrease in the proportion of the population who smoke, smoking is still the leading preventable cause of cancer in the UK . In 2018, of those cancers that can be caused by smoking 47% diagnosed in England were attributable to smoking with lung cancer registering as the fifth leading cause of death in England and Wales. Similar to smoking trends, we have recently seen a decrease in self-reported alcohol drinking habits although even small amounts of alcohol can increase the risk of developing cancer. After smoking, obesity is the second leading preventable cause of cancer with more and more people becoming overweight and obese in England. Healthier diets could prevent around 1 in 20 cancers.

There have also been improvements to the way we register cancer diagnoses which has impacted the level of diagnoses recorded. Since 2012, Public Health England has operated a single cancer registration system which has helped improve the accuracy and detail of these records to ensure better timeliness of cancer registrations.

Why are we seeing an increase in cancer survival?

The benefit of screening programmes is that cancers may be diagnosed before symptoms appear, leading to detection at an early stage or that may otherwise have gone undetected. Campaigns such as Be clear on cancer increase public awareness of symptoms which may lead to people visiting their GP earlier.

For many types of cancer, there is a better chance of survival if it is detected at an early stage. Thankfully, the majority of cancers that can be measured by stages are diagnosed in stage 1 (25.6%).

The NHS in England have identified cancer as one of their top priorities and there have been improvements to cancer services and care in England including an increase in GP referrals which could contribute to earlier detection of cancer.

What does the future hold?

Due to more robust data collection, we are able to analyse data in a way that was not previously possible.

Already the new single cancer registration system enables us to analyse 5-years’ worth of stage data for the first time. Stage at diagnosis is a measure of how far the primary tumor has grown, stages 1-2 being classified as “early” and stages 3-4 being classified as “late”.  These new improved statistics have meant we can offer better evidence to help show the importance of early diagnosis to inform new policy.

As well as better data collection, there is also more prevention measures being introduced, for example the HPV vaccine which helps to protect against cervical cancer.

Hopefully, with better data improving the evidence base for policy makers and new prevention measures, we should continue to see a slow down in the rise of cancer registrations as well as increases in cancer survival. 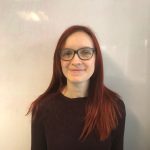 Tags: cancer, Health
The power of a royal baby name
Why are our children lonely?