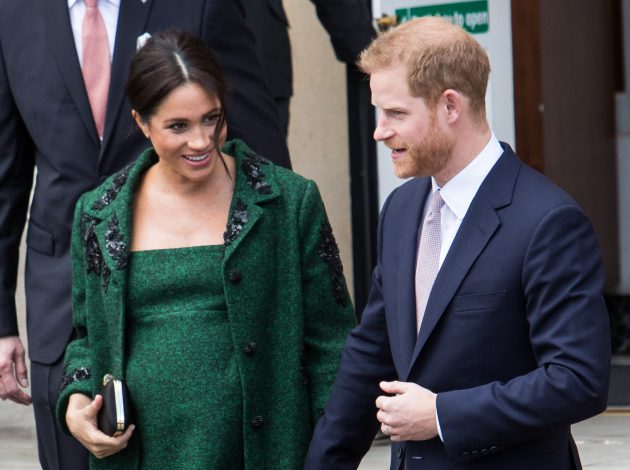 With Their Royal Highnesses The Dukeand Duchess of Sussex (Harry and Meghan) expecting their first child soon, ONS Head of Life Events Nick Stripe takes a look at the enduring popularity of royal baby names. What names might they choose? And what influence could their choice have on what we call our own little ones in the future?

Every year, alongside key statistics giving insight into topics as diverse as death rates, crime, migration and GDP, the Office for National Statistics (ONS) produces the official list of the most popular names given to babies in England and Wales – and many of the top picks are always inspired by the monarchy.

To reveal the power of a royal name, let’s go straight to the top. Throughout the last century, the one and only name that has always featured in the top 50 for girls is that of Queen Elizabeth.  In fact, since Sarah dropped to 103rd place last year, Elizabeth is now the only ever-present name in the girls’ top 100. But it has never been the most popular, unlike Margaret (the Queen’s sister), which held the number one spot in the 1920s, 30s and 40s. Elizabeth peaked in eighth place, just after the queen’s coronation in 1953, and currently lies 44th.

Traditional boys’ names tend to have more staying power. There are 12 that have remained in the top 100 throughout the last 100 years. They all have a royal or religious provenance. Incredibly, James has never dropped out of the top 20. And Thomas and William have been ever present in the top 50. The other constants in the top 100 are Alexander, Charles, Daniel, David, Edward, George, Joseph, Michael and Mohammed.

A royal seal of approval carries weight and influence in maternity wards up and down the land. When Prince William was born in 1982, his name had almost dropped out of the top 50. But it was back inside the top 20 by the 1990’s and remains the 11th most popular boys’ name today. Neither Harry nor Henry (Prince Harry’s actual given name) were inside the top 100 when he was born in 1984. But Harry hit the top of the charts in 2011 and 2012 and remains in second place today. Henry, currently the 13th most popular baby boys’ name, is as popular as it has ever been.

More recently, when Prince George was born in 2013, his name was already the 10th most popular for boys. By 2016 it had risen to third place, where it remains. There are approximately 20% more George’s being named today than there were before his birth.

It’s a similar story for Princess Charlotte, who was born in 2015. At the turn of the millennium, her name was the fifth most popular girls’ name, but it had dropped down to 25th place by 2015. Charlotte had an immediate turnaround in fortunes, rising straight back up to 12th place in 2016 and 2017. Approximately 25% more babies are given that name now than there were before her birth.

Following the birth of William and Catherine’s third child last year, we might expect a similar boost for Louis, currently in 82nd place for boys. But if Harry and Meghan pick a more unusual name, the sky is probably the limit. In British popular culture, for example, the influence of David and Victoria Beckham has been hard to miss in recent years. When they named their daughter Harper in 2011, there were only 42 girls given that name across the country. It ranked as the joint 858th most popular girl’s name. By 2017 it had shot up to 34th place, with over 1,600 babies named Harper. That’s a rise of almost 4000% in only six years.

But let’s cut to the chase. What name will Harry and Meghan choose? Well, at the risk of being impertinent, I suspect they will go for a reasonably traditional one.

A couple of years ago, I did a bit of crystal ball gazing, and picked out a handful of names to keep an eye on for an article in The Huffington Post. Louie [sic] was one of those names and, within the year, Prince Louis had arrived. Based on the principle of not changing a winning formula, I’m going to limit my choice to those same names.

The bookies seem to think a baby girl is on the way, and so my guess is Alice. Riding high across the country, Alice currently occupies 17th place in the girls’ chart. It was the name of Prince Philip’s mother, Princess Alice of Battenberg. And that of his great grandmother, Princess Alice of the United Kingdom, the third child of Queen Victoria and Prince Albert.

For a boy, I’m torn between Albert and Arthur. Currently in 59th place in the boys’ chart, Albert was not strictly on my list of names to watch out for. But Albie, in 57th place, was.

Sitting pretty in 19th place, Arthur is more popular than it’s been since the 1920’s.  It’s one of the middle names of Prince Charles, William and Louis. And Prince Arthur, Duke of Connaught and Strathearn, was the seventh child of Victoria and Albert. Famously, of course, King Arthur is perhaps the most legendary and mythical British king ever.

I really can’t decide, so don’t put more than £1 on it. No-one’s ever found the holy grail by following my tips!

Nick Stripe, Head of Life Events at the ONS. @NickStripe_ONS

Decoding the gender pay gap: how a Bletchley Park codebreaker helped explain a strange paradox
Are there more people diagnosed with cancer?