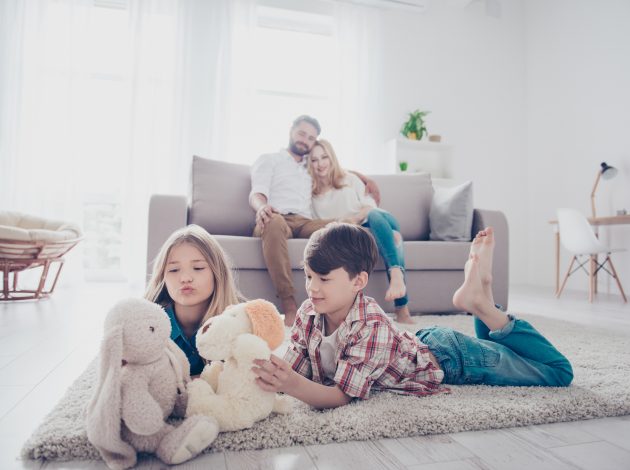 The phrase ‘2.4 children’ refers to the stereotypical family size in this country. But does it still hold true? As the ONS publishes its first analysis of births that took place in England and Wales in 2018, Nick Stripe considers whether it’s time to change that number.

Cast your mind back to the nineties. The era of Britpop and football coming home, where things could only get better. The sitcom 2Point4 Children, starring Belinda Lang and Gary Olsen, introduced Bill and Ben Porter to BBC viewers on the 3rd September 1991. It ran until the 30th December 1999, just as the new millennium party was getting into full swing.

Strictly speaking, Bill and Ben only had two children, David and Jenny. But dad, Ben, had juvenile tendencies which, helpfully, meant that there were 2.4 kids really. How typical were they then and now?

The broad picture painted by our analysis of births in 2018 is one of decreases and record lows. A birth rate of 11.1 births per 1,000 total population was the lowest ever recorded. And a fertility rate of 1.7 children per woman, was lower than all years except 1977 and 1999–2002.

How things have changed

At the height of the ‘baby boom’ in the late 1940s and mid 1960s, England and Wales was the scene of nearly 900,000 births per year. This represented a birth rate of around 20 births for every 1,000 people in the country. If the fertility rates of those years had persisted, women would, on average, have each given birth to around 2.8 children. This is known as the ‘total’ fertility rate. It projects forward how many children the average woman would have if she experienced that year’s ‘age-specific’ fertility rates throughout her life.

In the years that followed, birth and fertility rates declined dramatically. By 1977, the number of births had dropped by about 300,000 compared to the mid 60s. The birth rate had fallen to 11.5 births per 1,000 people in the country. And the total fertility rate experienced in that year would have seen our average woman giving birth to 1.66 children, if it had persisted. For that one, yet to be repeated year, there were more deaths than births across England and Wales.

A fairly strong recovery in births over the next 10 years plateaued in the early 2010s. By then, fertility rates had risen back up to just under two children per woman.

This recovery was partly the result of an increase in fertility rates among mums born in the UK, but it also coincided with an increase in immigration. People that came to the country tended to be younger, working age adults. And fertility rates for non-UK born mums tend to be higher in aggregate, although this can depend on country of origin. European fertility rates are generally lower than those in England and Wales, whereas rates in countries such as Pakistan and India are higher.

Now we’re at or near record lows

Which brings us back to 2018. Births, birth rates and fertility rates have been falling since 2012, a rate of decline which has accelerated in the last couple of years. We are now at or near record low levels. And we’re on a downward trend.

As the total fertility rate is effectively a projection which changes from year to year, we can also look at how many children different cohorts of women have. In other words, we can take more of a backwards look too.

Trends in fertility have changed over time, not only in terms of periods of higher and lower rates, but also in terms of when women tend to have children. For example, the most common age of motherhood declined from about 25 in the post-war period, to around 22 in the early 1970s, and now stands at about 31 years of age.  Given these changes to age-specific fertility rates, which form the basis of the total fertility rate, it might make more sense to look at final family sizes.

Women born between 1930 and 1940, who reached 45 years of age (the expected end of their childbearing years) between 1975 and 1985, did indeed have, on average, approximately 2.4 children. This declined to 2.2 children for women who reached 45 in the early 1990s, when Bill and Ben Porter first appeared on our screens. By the time they left them, it had declined further, to approximately two children. Women turning 45 now tend to have around 1.9 children.

These rates and averages include all women, including those who do not have any children. If we’re thinking about families with kids, and how many kids those families have, then perhaps we should exclude women who do not have children from our calculations. This will, of course, raise the average number of children. The extent to which it’s raised will depend on the number of women who remain childfree, which itself has also changed over time.

Approximately 12% of women born between 1930 and 1940 remained childfree, a figure which has ranged between 10% and 20% in the years since. Of those born in 1972, who might reasonably be expected to have finished having children now, 18% are childfree. On that basis, the average number of children born to women who have had at least one child, stands at about 2.3 for women born in the early 1970s. In which case, 2.4 could still be argued to be a valid enough number.

When it was first coined, ‘2.4 children’ was based on the traditional nuclear family. But there are increasing numbers of people in different family units now. As well as childfree families, we have single parent families, step families, extended families, and grandparent families. So maybe it’s time to put the phrase to bed?

Of course, we can’t know what will happen in the future. Whether people have children and how many children they have is the result of personal, biological, social, economic, cultural, political and environmental factors. The only thing we do know about the future is that it will be different.