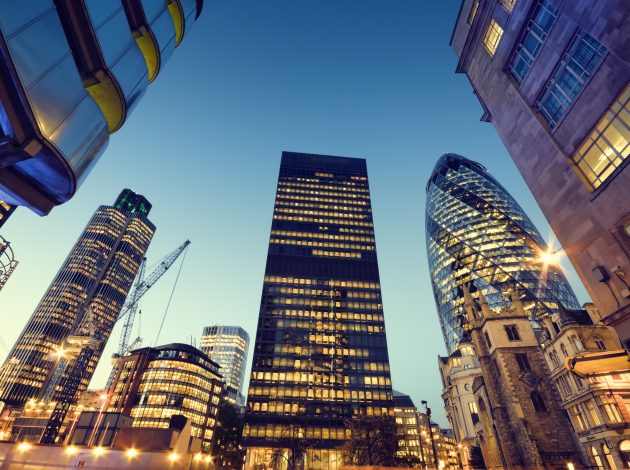 One of the less discussed economic issues in the pandemic has been the big fall in business investment, which contributes to GDP and is also a driver of future productivity growth. Here David Roberts looks at recent trends and what they tell us about the economy.

Business investment, the amount spent on assets such as machinery, buildings and vehicles fell by a quarter in the three months to June 2020. Excluding a technical quirk in 2005, this is by far the largest fall in business investment on record.

Business investment growth in recent years has clearly reflected events impacting the UK economy. Following a fall during the 2008-09 financial crisis, business investment recovered to pre-downturn levels in a similar length of time to GDP. Business investment continued to grow, on average, faster than GDP, until plateauing after the EU referendum in 2016.

A decline throughout 2018 was followed by a recovery, with limited overall growth between Quarter 2 2016 and Quarter 4 2019. However, any potential release of pent-up funds in 2020 was halted by the Covid-19 pandemic. 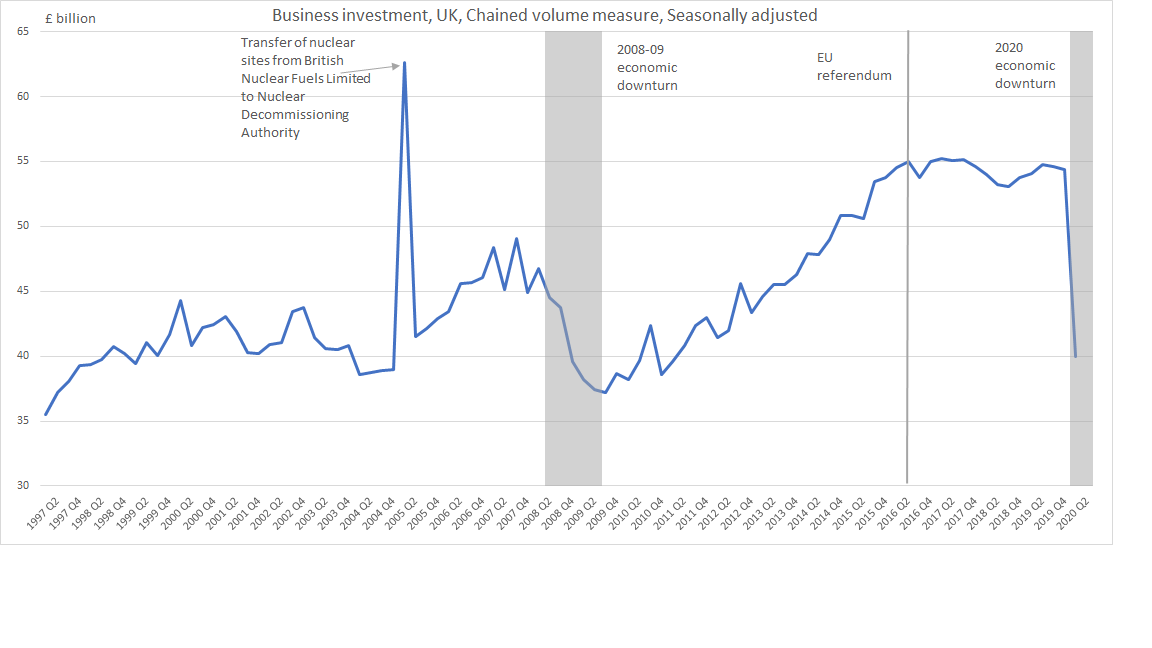 Evidence from businesses suggests that the COVID-19 pandemic led to many businesses across a wide range of industries putting non-essential investment on hold, with some projects being cancelled altogether.

Investment in transport equipment, such as vehicles, was particularly hard hit, falling by almost half in the latest period. This was the largest percentage fall in any type of investment. Transport equipment includes high value assets such as ships, aircraft and railway rolling stock, as well as motor vehicles, so investment spending in this category can be volatile. This is the second largest fall in transport equipment investment on record, after Quarter 1 2011, when UK trade data showed there was a large fall in the purchase of aircraft, likely due to a timing-effect because of a change in the zero-rating of VAT on qualifying aircraft, where purchases were brought forward to avoid the change in taxes.

Rental and leasing bearing the brunt of the pandemic

Some of the most recent fall in transport equipment investment can be attributed to changes in the rental and leasing industry. This industry accounted for more than a third of investment in transport equipment in 2019, but only a quarter in Quarter 2 2020, showing a greater than average fall in investment in this industry. Companies involved in the rental and leasing of motor vehicles reported investment at a level almost four-fifths lower than in Quarter 2 2019. Additionally, data from the Society of Motor Manufacturers and Traders (SMMT) show that new registrations of fleet cars fell by more than two-thirds in Quarter 2 2020, compared with Quarter 2 2019.

Evidence from comments from Bank of England Agents suggests that companies across the economy have mostly postponed or cancelled non-essential investment. Some of the pressure on the rental and leasing industry was due to reduced travel and tourism due to the Covid-19 pandemic. The fall in supply of new cars, due to decreased production, both domestically and abroad, and the lack of demand meant acquisitions of cars by these companies were much lower in Quarter 2 2020 than at the same time in the previous year.

One aspect of rental and leasing that has partly bucked this trend was vans. The British Rental and Leasing Association (BVRLA) reported abnormally high levels of demand for vans for the time of year, which appears to be driven by increased demand for home deliveries as consumers moved their spending online. However, figures from the SMMT still showed that total new registrations of vans in Quarter 2 2020 fell by more than half compared with the same quarter of 2019. This shows that while the demand for van hire may have increased in some industries, this has not been reflected in increased investment in new vans by rental companies.

Possible signs of a recovery?

Given that there is evidence that a proportion of the fall in investment in transport equipment was only intended to be postponed rather than cancelled altogether, what can vehicle registration indicators tell us about the potential for a recovery in transport investment?

According to the SMMT, fleet car registrations in Quarter 3 2020 were 10% down on the historic average, while registrations of new vans increased by over 4% over the same period.

We are clearly living through challenging times with a number of factors affecting how much businesses invest, as well as what that money is spent on. However, our up to date and detailed investment figures are helping policy makers assess these detailed impacts though the pandemic and as we start to recover. 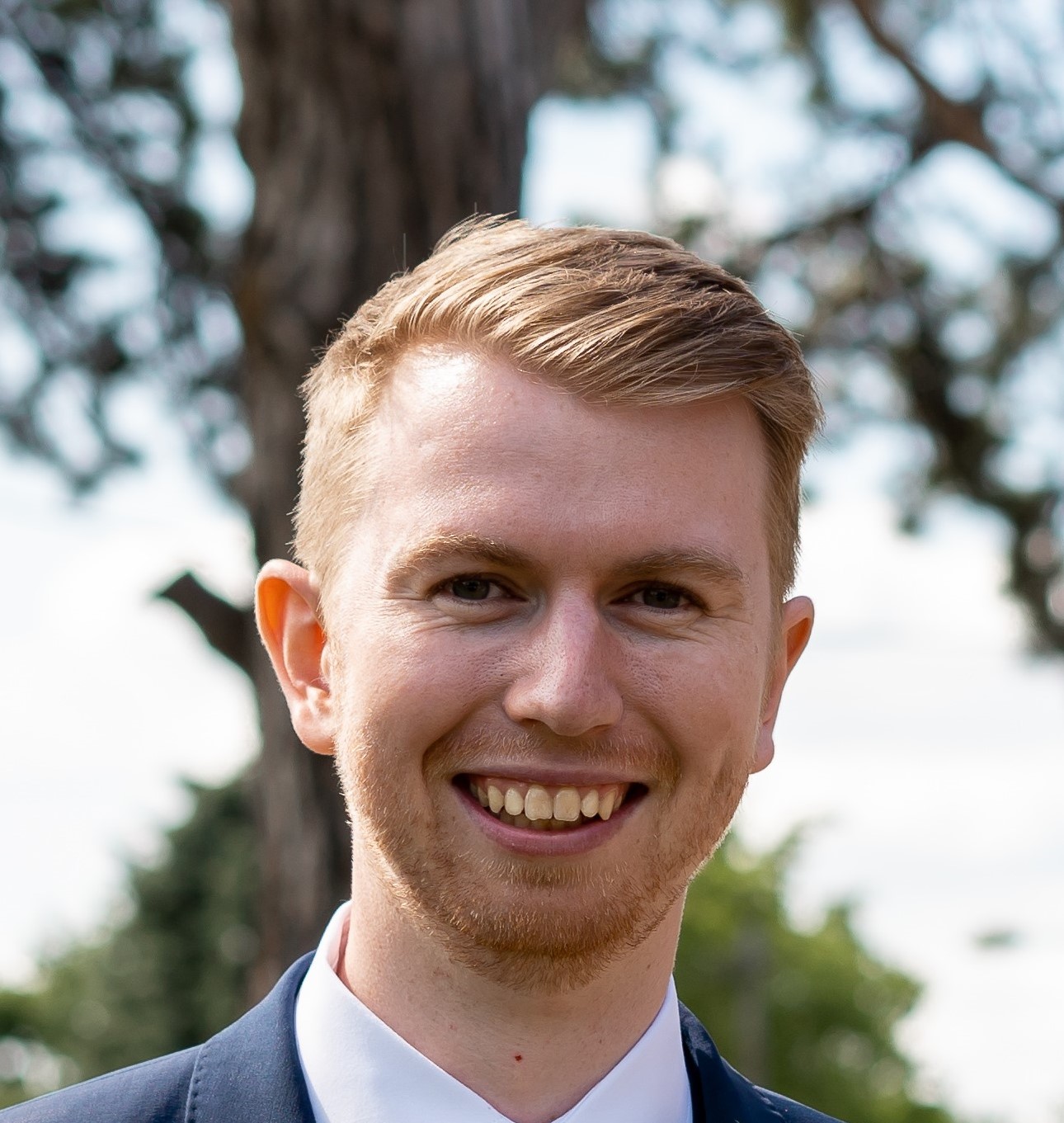 Measuring the labour market during the pandemic
The wait is over!