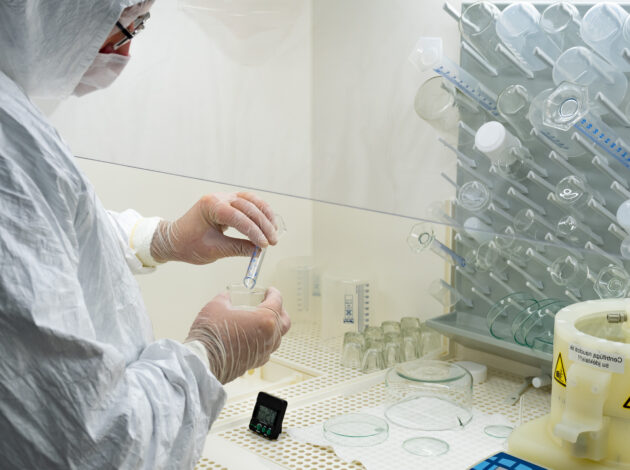 As well as providing estimates on infection levels and antibodies, the Coronavirus (COVID-19) Infection Survey (CIS) collects information from participants on their vaccination status, providing some insight into vaccine effectiveness on variants, including Delta. Our monthly visits to the same participants over a long period of time allow us to see who becomes infected and how antibodies change over time.

The latest stage of the pandemic in the UK has seen a third wave as infection rates rose mainly due to the Delta variant. At the same time, the vaccination programmes have continued to provide first and second doses to more people.

The research carried out by the team at Oxford analyses differences in vaccine effectiveness and symptoms between two time periods; up to mid-May 2021 (when the Alpha variant was dominant) and since mid-May (when the Delta variant became dominant). Results include comparisons between the AstraZeneca and the Pfizer vaccines – the two most commonly used vaccines in the UK.

In an ideal world, identifying how vaccines differ in their effectiveness in protecting against a new variant like Delta would involve comparing people across groups who are very alike (for example people of the same age, sex, ethnic group, who live in the same place and who are at a similar risk of catching COVID-19) who had received each vaccine type. Then we could be confident that any differences between the two groups were because of the different vaccines they had received, not other things about them or other factors affecting the results.

In practice, people who have had different vaccines may be quite different, so the comparison is less clear cut. For example, older people were prioritised and received their vaccines earlier, so as a group, had been vaccinated for longer and have therefore had more opportunity to become infected since receiving their vaccine. Added to this, the different types of vaccine have not been distributed equally among people of different ages (for example, younger people are most likely to have received the Moderna vaccination). There are other factors affecting results too, for example, we know that the immune systems of older people are generally weaker than in younger people, so they may respond differently as a group because of this. Therefore, comparisons of how effective the different vaccines are need to take all of these factors into account as much as possible to enable a fair comparison between the different vaccines.

After making these careful adjustments, the new research led by the Oxford team shows that two doses of either AstraZeneca or Pfizer vaccines is significantly more effective in preventing infection compared to just one dose, particularly now Delta is the main variant. Two doses of either kind of vaccine offers at least as good protection as those who have built natural immunity following a previous COVID-19 infection and have not been vaccinated. However, following second doses, immunity varies between the two vaccine types.

Those who received the AstraZeneca vaccine experience an initially lower, but more steady effectiveness in preventing infection over time. After a few months the effectiveness of the vaccines were about the same, and both vaccines gave good protection against the Delta variant.

The greatest immune protection was seen in those who had been infected with COVID-19 in the past and subsequently had received two doses of a vaccine. Vaccines were also more effective in younger people than in older people.

The research also looked at the effectiveness of the vaccines comparing the Delta variant (the most common variant in the UK since mid-May) and the Alpha variant (the most common variant in the UK in the previous six months). It found that vaccinations are still effective in preventing new infections compared with unvaccinated individuals, but the vaccines are less effective against the Delta variant compared to the Alpha variant. Whilst the risk of getting COVID-19 is still lower for people who had received two doses of either vaccine, if they do get COVID-19 they will now have just as much virus in their nose and throat as people who haven’t been vaccinated, and so may be just as likely to pass the infection onto others. Further details of this research by Oxford University are available in the pre-print paper.

Our survey collects information reported by participants on any symptoms they have experienced in the last 7 days before their regular swab tests. Some participants will test positive for COVID-19 whereas the vast majority of participants will have a negative test result; both of which will include people who have and people who have not reported symptoms. Analysis of reported symptoms between those who test positive and those who test negative allows us to find out which symptoms are associated with COVID-19 and how these change over time and vary in different people.

Symptoms associated with COVID-19 tend to be reported more when COVID-19 infections across the community are increasing or at a high level (such as January 2021). More recently from mid-May onwards, the majority of symptoms have increased, consistent with increasing numbers of people infected with the Delta variant. While there were some increases in people reporting a sore throat and cough from April onwards, this was also the case in those who tested negative for COVID-19, suggesting these symptoms may be due to other respiratory viruses.

The analysis showed that just under half of people (48%) testing positive reported symptoms compared with 3% who tested negative. Cough, fatigue, headache and loss of taste and/or smell continue to be the most commonly reported symptoms in those testing positive. The research also found that in people who test positive and in those who test negative, fever is more commonly reported in children and adolescents; and shortness of breath and fatigue are more commonly reported by all older people. In those who test positive, the analysis shows no major shift away from the classic symptoms of COVID-19 since the Delta variant has emerged in the UK, although a higher percentage reported fever and a headache compared to the Alpha variant. Further results are available in the pre-print paper.