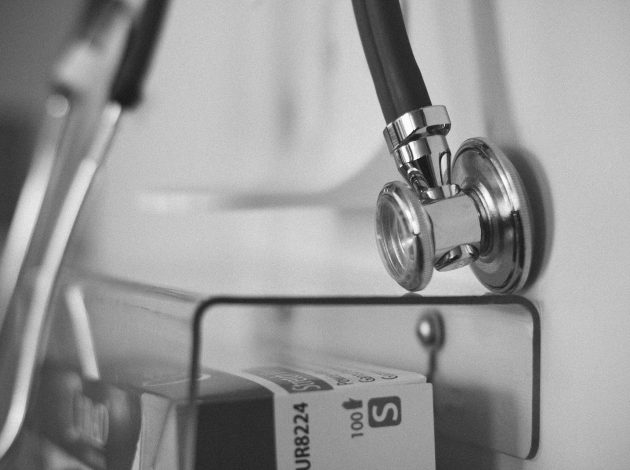 An increase in the number of people dying in hospital with a diagnosis of malnutrition has prompted understandable concern. One leading charity has described the figures as “shocking.” But as Myer Glickman explains, many factors other than poverty or neglect lie behind the data.

Death due to malnutrition is very uncommon. In 2016 there were 90 deaths given an underlying cause of malnutrition (66 of those in NHS hospitals) and another 391 (285 in hospital) where it was mentioned on the death certificate as contributing to the death.

These figures represent around 1 in 10,000 and 1 in 2,000 respectively of all the deaths registered in England and Wales. Given these very small numbers, the figures are liable to fluctuate from year to year, and it is difficult to establish statistically meaningful trends.

Nevertheless, some commentators have suggested that these deaths reveal poor quality of care in NHS hospitals. The data do not provide evidence for that conclusion.

Evidence on time trends in deaths involving malnutrition is inconclusive, but there has been an increase over time in the number of patients admitted to hospital while already malnourished. This may suggest that malnutrition is increasingly prevalent in the community, possibly associated with the ageing of the population and an increase in long-term chronic diseases.

Looking only at deaths where malnutrition was the underlying cause, there were 58 in 2001. The numbers appear to have risen slowly and unevenly over time. However, time trends can be understood only in the context of the growth and ageing of the population. The age standardised mortality rate in 2001 was 0.13 per 100,000 people, as opposed to 0.16 in 2016. There was no consistent rise, however, with the highest rate being 0.18 per 100,000 in 2015. Importantly, none of the differences in the 16-year time series are statistically significant. 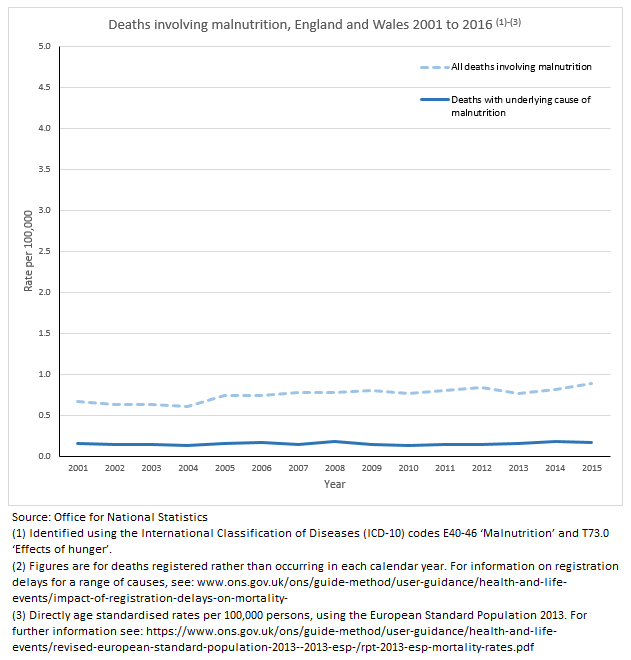 Looking at all deaths involving malnutrition whether it was the underlying cause or not, the age standardised rate was 0.58 in 2001 and 0.88 in 2016. This difference is statistically significant. Although there were only small changes year by year, there is a general upward trend and the rates in every year since 2006 have been higher than in 2001.

Malnutrition is rarely the sole cause of death

Where malnutrition was a contributory factor in the death, the underlying cause varied widely, including a range of diseases affecting the patient’s ability to eat or absorb nutrients, such as diseases of the digestive system and several cancers. Notably, 13 per cent of these cases were attributed to alcoholic liver disease or chronic alcoholism, and a similar proportion involved dementia or Alzheimer’s disease.

The rules for classifying deaths in statistics are set by the World Health Organisation and incorporated into decision-making software which infers which of the diagnoses mentioned on the death certificate was the underlying cause. The complex operation of these rules may not produce the same results as a study of the patient’s medical history. Particularly where old age, respiratory infections or dementia are involved, the decision as to which factor was the underlying cause may be unclear or somewhat arbitrary.

These figures suggest an increase in age standardised hospitalisation rate over the period 2007-8 to 2016-17 from around 0.8 to 1.5 per 100,000 for cases with a primary diagnosis of malnutrition, and 5.7 to 15.8 for cases where another disease was the primary diagnosis (ONS calculation based on NHS Digital data). In 2007-08 the rate of admissions where malnutrition was secondary was 6.9 times the rate where it was the primary diagnosis: this ratio rose steadily to exceed 10.7 in 2013-14 before declining very slightly.

But the hospital trend is not quite as alarming is it appears. Firstly, the figures don’t necessarily equate to the exact number of patients, as one person can be admitted to hospital several times for the same illness. Secondly, it’s likely that secondary conditions like malnutrition are being better diagnosed and recorded in hospitals in recent years.

While the limits of the data make caution in drawing conclusions necessary, it seems likely that the prevalence of malnutrition has in fact increased over the last decade. However, the extent of the real increase is unclear.

The mortality data and hospital admissions both show that malnutrition doesn’t often occur on its own. It is most often the result of another underlying illness, or one of a combination of symptoms in an individual with multiple or chronic conditions. Both data sources suggest that at least part of the increase over time is due to an increase in these other illnesses, probably associated with the ageing of the population as a whole.

It is very rarely possible to make any inference based on mortality data alone from a death in hospital to the quality of care the deceased received. This is certainly the case when it is not known from the death certificate whether the individual was already suffering from malnutrition before admission, or for how long. The evidence does suggest that most of these deaths were of seriously ill people with multiple health problems, in many cases capable of being individually fatal.

ONS is increasingly collaborating with other public sector organisations, especially following the passing of the Digital Economy Act 2017, to link together data sources that will help throw more light on complex problems. This is potentially the case with issues such as the reason for trends in deaths from malnutrition, where combined analysis of patients’ medical records and death certificates will provide a more definitive picture at a later date. 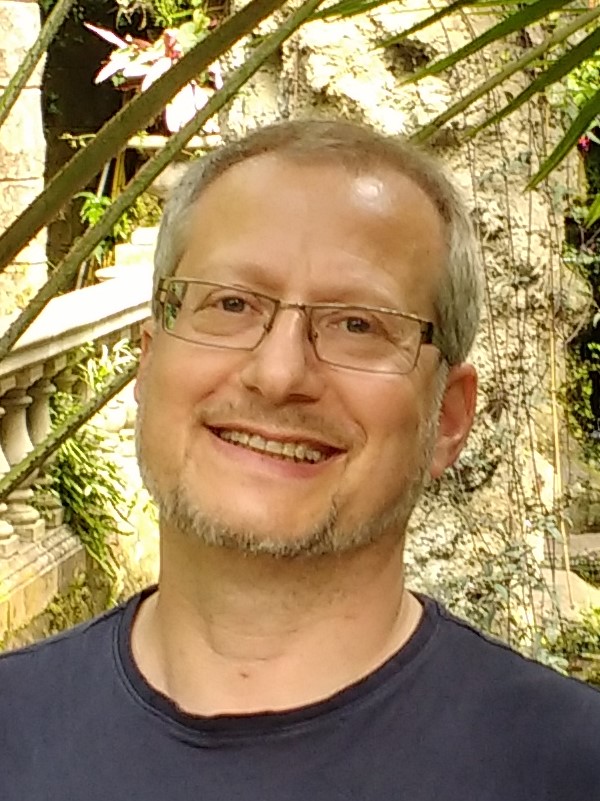 Getting in touch with intangible assets
How much is the UK worth? The challenges of capturing the value of our nation’s assets