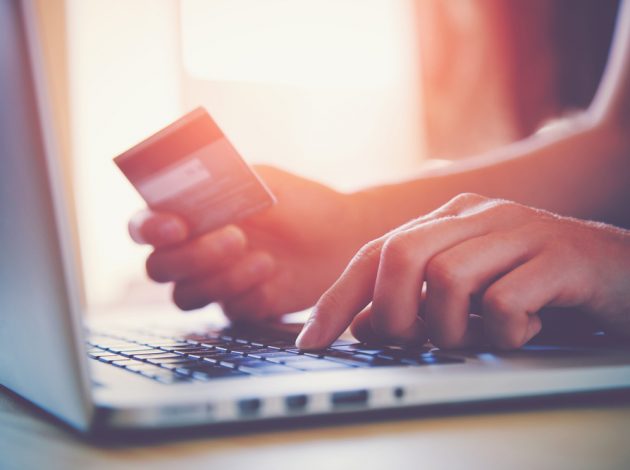 The COVID-19 pandemic has had a profound effect on the retail sector with many stores forced to close at the height of lockdown. During that time consumers switched their spending to online. As Rhys Dalgleish explains, since many shops have now reopened, the shift back to in store purchasing has begun but a far higher proportion remains online than before the crisis.

At the height of pandemic restrictions in April 2020, retail sales fell by a quarter compared with pre-COVID levels. While overall sales have now recovered this lost ground, in store sales are still nearly 10% down, while those online are still up by nearly half on the start of the year.

As discussed, the COVID pandemic has caused a change in consumer behaviour as increasingly purchases are made via websites.

The proportion of total sales that took pace online has grown by over 10% when comparing the period of the pandemic this year (March to August) against the same period last year.

Clothing, household goods and “other” stores have all seen their proportion of online sales more than double during the pandemic period.

While the proportion of instore sales for food stores remains high, there has been a significant increase in online sales, which now accounts for almost 10% of all sales.

The data show that sales at online only stores (in non-store retailing) have stayed flat. This means the boost in online has been driven by a move from physical stores to their websites. The store element to non-store retailing captures businesses that are not predominantly online, such as markets and stalls, in addition to online retailers that might have a small store presence.

Clothing stores have been among the worst hit retail sector. At the height of the pandemic their sales were down four fifths and they remain more than a quarter below pre crisis levels. Feedback from retailers suggest that despite clothing stores reopening they are still being severely affected by social distancing measures, hitting footfall and the ability of consumers to try on clothes.

Household goods stores and “other” stores (which includes medical goods, sports equipment and jewellery stores amongst others) initially saw large falls in sales comparable with that witnessed for clothing stores. However, their recovery has been more rapid with in-store sales now both less than 10% lower than pre COVID levels. Household goods stores reported that consumers focused on DIY and home improvements during the lockdown period, which helped with in-store sales while “other” stores were helped by medical goods retailers within the sector, who reported large sales of hand sanitisers and other COVID related products.

Department stores did not witness as large a fall in in-store sales as other sectors due to many stores remaining open during lockdown because of the wide array of essential products they sell, particularly those with food halls. However, while the fall seen in department store sales was not as severe, there hasn’t been such a strong a recovery in this sector, with sales in August still just under a fifth lower than before the pandemic.

Food stores, in contrast to all other sectors, saw an increase for in-store sales at the start of the pandemic, as retailers witnessed panic buying of essentials leading to a jump of almost 10% in March. Sales have slowed since as the panic buying eased and actually dipped below their pre Covid levels in both July and August. This can be partially explained by an increase in online orders and by the re-opening of other parts of the economy, such as restaurants and bars. 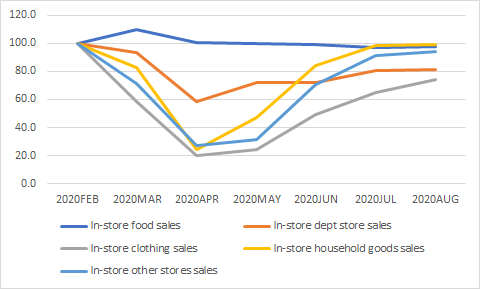 With so many stores closed between March and May, consumers had no option but to turn to the internet to buy the products they needed.

Food stores have seen the largest increase in online sales, with August’s sales having nearly doubled, compared with February 2020. Large supermarkets reported a huge surge in “click and collect” and delivery orders. However, it is worth noting that instore food sales still accounted for nearly nine tenths of all food sales in August, despite the increased online sales.

“Other” retail stores witnessed a large uptake in online sales from April onwards with total online sales peaking at almost double February levels. These levels were maintained through June and July and, while they dipped in August, remain over 50% higher than the start of the year.

Both department stores and household goods stores reported a similar pattern of huge online sales surges at the beginning of lockdown with both sectors sales increasing to double the February level in June. However, both sectors also witnessed monthly falls of nearly a fifth in July. This maybe evidence of the impact of the easing of social distancing guidelines as consumers return to stores and spend less online. However both sectors still reported a 70% increase in online sales during August when compared with pre COVID levels.

Clothing stores in contrast to all other retail sectors saw a fall in online sales during the pandemic with sales falling almost a third in April, compared with February 2020. This fall can be partly explained by several clothing retailers closing their websites at the start of lockdown. Sales began to grow in June as more stores returned to online trading and by August sales were nearly a fifth higher than pre COVID levels. However, this sector has not seen the large boost in online sales witnessed in other areas of retail and is further evidence of how hard hit clothing retailers have been by the COVID pandemic. 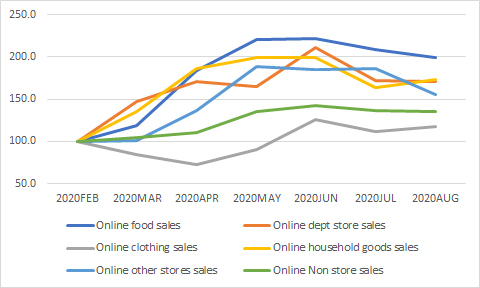 Rhys Dalgleish is Retail Sales Production Manager at the ONS