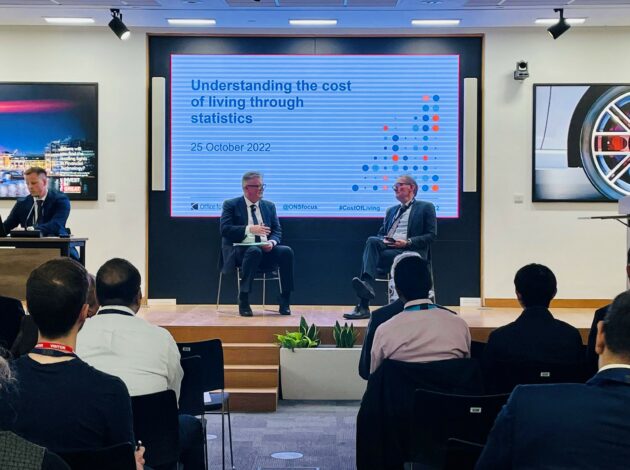 To mark the end of 2022, the National Statistician Professor Sir Ian Diamond, looks back on another year of notable statistics which saw the release of over 1,000 publications from the Office for National Statistics.

It’s been another momentous year for numbers and statistical insights. We’ve produced the first results from the 2021 Census, rapidly gathered data to inform the UK humanitarian response to Ukraine’s crisis, closely monitored the cost-of-living and its impacts and continued to track the path of Covid-19 and its ongoing effects, to name but a few.

ONS statistics have remained the most anticipated and highly referenced indicators in a time of rapid change. Throughout our work we have sought to shed new light on how economic and social change has affected everyone, wherever they live and whatever their circumstances.

It’s because of this very successful digital-by default census that we now know our population grew by more than 3.5 million (6.3%) since the last one in 2011. It showed also how we are living in an increasingly multi-cultural society with greater ethnic diversity than ever before.

But there’s much more to come. A rolling programme of census data releases will continue into the New Year, with the releases due in January on housing; sexual orientation and gender identity; education; health, and disability and unpaid care.

This year has also been dominated by economic challenges. It’s because of data the ONS collects that we’re able to rapidly track changes in our economy.

We announced that inflation as measured by the Consumer Prices Index (CPI) hit 11.1% in October, the highest level in 41 years. But to get a better idea of how the current economic climate is directly affecting people, we also need to consider that everyone’s experience of rising prices is slightly different.

With this in mind, we started web-scraping supermarket data to track the price of the lowest-cost grocery items, revealing that they have increased in cost by around as much as average food and non-alcoholic drinks prices (rising by 17% and 15%, respectively, over the 12 months to September 2022).

We also designed an online calculator which helps you find your own personal inflation rate is. This handy tool, which has already been used by over a million people, allows individuals and households to better understand how they are personally impacted by rises in the cost of living.

Changes in the labour force

It has also been a year of profound changes in the UK labour force and here our data have revealed important issues.

2022 saw a record number of job vacancies, more than the number of people unemployed for the first time. Meanwhile, we explored the rise in economic inactivity since the pandemic and found that around 2.5 million people reported long-term sickness as the main reason for economic inactivity, up from around 2 million in 2019.

Exploring this in more detail we looked at how health conditions of those economically inactive varied by age and previous job. Further analysis also showed that long-covid may be a factor, with inactivity growing more quickly among people with self-reported long-covid.

We also found that people over 50 years old in the labour market were driving the increase in inactivity for reasons such as retirement, change in lifestyle, and health issues.

This illustrates ONS’ ability to provide relevant regular statistics as well as to quickly respond to emerging priorities by providing timely and accurate statistics for the public good.

Whilst the COVID-19 Infection Survey (CIS) has been gathering data on coronavirus infections and antibodies among the population at large since the early months of the pandemic in 2020, we have recently launched a pilot study to determine whether it could also offer an early warning of levels of flu and RSV in the private residential population.

What’s more, our Opinions and Lifestyle Survey suggested that wellbeing has improved since the lowest points during the pandemic but is still below levels seen before the outbreak of Covid-19. In 2023 we will build on this work with the results of a consultation that looks at measures of wellbeing.

In addition to our usual health stats, this year we also launched the Health Index – the GDP of health, as it’s become known. This index gives us the overall picture of the nation’s health and how it has been declining or improving. This new tool, which revealed that in 2020 the Healthy People score declined considerably compared with 2019 also allows us to see in close-up how health varies from area to area and what local factors are in play.

2022 has also seen us step up our work to ensure UK statistics reflect everyone in society. This includes the new National Statistician’s Inclusive Data Advisory Committee and more qualitative fieldwork to address gaps in understanding the experiences of currently underrepresented groups such as our recent work on people identifying as Gypsy or Traveller.

This is just some of what’s been going on, and there is more to come in 2023, including the establishment of a new Government Statistical Service committee on Inclusive Data, which will enhance our accountability and ensure we proactively drive progress in partnership across government.

Monitoring the effects of climate change and progress towards ‘net-zero’ has been an important new area of activity for us.

As 2022 drew to a close, we released a new and improved version of the UK Climate Change Statistics Portal, pulling together relevant and timely statistics all into one place so that policymakers have the data they need to inform efforts to reach ‘net zero’ emissions by 2050 and adapt to climate change.

Next year we will be building on our efforts to collect and link more de-identified data from across government and industry to give us more of the rapid and detailed statistics that we’ve come to rely on in recent years.

This will include the continuation of our work to radically transform our inflation statistics, by adding new data sources, to give the UK the most accurate and detailed measure of inflation in history. And, after a year that’s seen greater recognition that there is much more to gross domestic product than what comes directly from the economy, we’ll also be doing more to factor in the environment, natural capital and human capital.

And much of this new data could become part of the new Integrated Data Service: a cloud-based platform that will see ready-to-use datasets made available to cross-government teams and wider research communities, enabling them to securely share, link and access them for vital research. The service, which will see full launch in 2023, is a collaboration among institutions to work on projects that shed light on some of the big challenges of the day.

It’s been a busy year with the launch of more innovative products that allow people to really understand how the big issues directly affect them and the area they live. In the coming year, we will continue to push this innovation to ensure that we can rapidly harness the best data to tackle problems and deliver maximum public benefit.